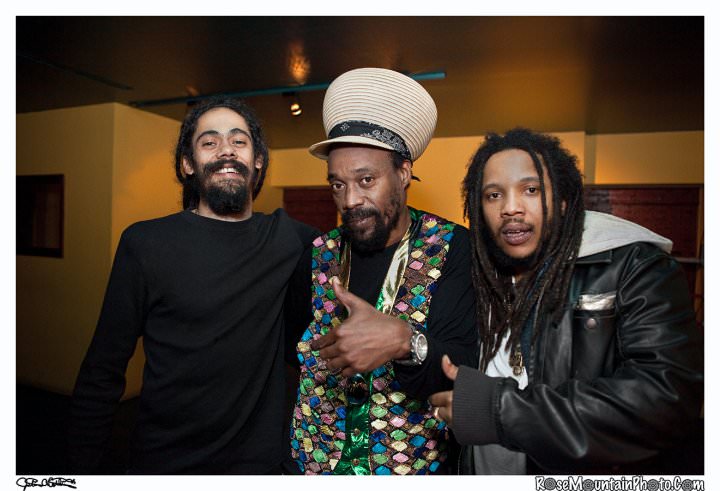 When “Welcome to Jamrock” erupted onto airwaves and blew apart iPods halfway through 2005, it came as a shock to some – but not to Damian “Jr. Gong” Marley. The song is about the farthest thing from commercial music offerings today- an outraged and unapologetic description of poverty and political violence ravaging his homeland of Jamaica- but “Welcome to Jamrock” hit. And it hit hard because it is the sound of truth and the result of years of work to bring that truth to light. Jr Gong has been honing his skills not so quietly for some time. He made noise early on with the 1996 release of Mr. Marley, and his major label debut, Halfway Tree, showcased a unique gift for blending hard –hitting reality rhymes and an uncommonly eclectic musicality. With a classic reggae sensibility at its core and run through with streams of hip-hop, R&B and dancehall, the album resonated with urban tastemakers and won a Grammy for Best Reggae Album in 2001. Meanwhile, Jr Gong was laying the groundwork for the tracks that would become the Welcome to Jamrock album. Soon after its summer 2005 release, Welcome to Jamrock became an urban phenomenon, followed by Rolling Stone’s heralding of Jr. Gong as one of the “ top 10 new artist to watch” in 2006. The youngest son of Reggae legend Bob Marley, Jr. Gong garnered his own place in music history when he became the first-ever Reggae artist to win a Grammy for Best Reggae Album. Marley was also a big winner at the 2006 International Reggae and World Music Awards, picking up all six honors that he was nominated for. Since the release of “Welcome to Jamrock”, the tireless Marley has been touring non-stop, shaking up stages all over the world with his band, The Empire at Coachella, Bonnaroo and the Austin City Limits Festival, as well as landing the coveted opening slot on U2’s record- breaking jaunt. He is currently in the studio with Nas working on their upcoming studio album, “Distant Relative”.